Why the Filioque is Important

To many modern Western Christians, the Great Schism of 1054 seems incomprehensible.  Not only are definitions of the Holy Trinity seemingly so irrelevant to modern Evangelical practice, but the heated distinction between the two views almost seems like a sinful dispute over something that shouldn’t really matter.  I mean, who cares who proceeds from what, right?  It’s all God, right?  We love Jesus, don’t we? 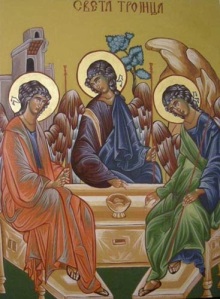 And yet, that is the problem.  The reason for the Filioque comes about precisely from the attitude that “it’s all God”.  Because while it is “all God”, it’s not all the same.  And to pretend that it is so goes beyond the bounds of theoretical intellectual musings, and into how one directly experiences the Holy Trinity of the great I AM.

The Filioque – the proposal that the Holy Spirit proceeds not only from the Father, but also God the Son, stinks of the driest of dry theology.  But what is it really saying?  What is the real implication? 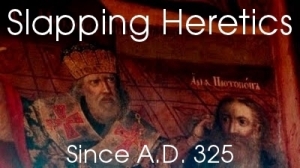 However, in the 6th Century, some Christians, spurred on by former Arians who had been chrismated into Orthodoxy, wanted to emphasize a particular view of God that the 4th Century Bishop Augustine of Hippo had put forward – that of Divine Simplicity.  In other words, God has a unity to Himself that comes down to His Essence.  He is Holy, and He stands alone and apart from His creation.  Therefore, the Spirit also proceeds from the Son.  Because it is All God, and the Incarnate God should breathe life into the Works of God.  And as the Franks replaced the Byzantine Roman influence in Western Europe in the 8th and 9th Centuries, this view of God as Divinely Simple and set apart became the predominant view of God.

It’s a view that makes logical sense to a point, but is not part of the teaching of the Church and its Fathers.  God is not separate from His creation in the sense that he is “somewhere else”.  He is everywhere!  Furthermore, He is Relationship, He has Three Persons, and He seeks to relate to us.  To say that the Incarnate God initiates the Spirit God subordinates the Spirit to the Incarnate, and reduces God to His Essence, One that is set apart from the material world, and from us.  It causes an imbalance in the Trinity.  It is the Spirit that gives Life and that fills the material world, so if we reverse the order to say the Spirit proceeds from the Incarnate, then we are saying that the Spirit is not someone that already fills all things – He is merely a Gift deigned to be given by Christ to the worthy, and the implication is that this Gift is created, not pre-existent.  The Spirit reduces in importance.

The Orthodox teach that God is not only Essence, but Energy, and that furthermore, we can partake of this Energy and become One with it.  This is, in fact, the very purpose of our Christian life.  The first thing that most Orthodox pray during their prayer time is a prayer to the Holy Spirit:

“O Heavenly King, O Comforter, the Spirit of Truth who art in all places and fillest all things; Treasury of good things and Giver of Life – come and dwell in us and cleanse us from every stain, and save our souls, O Gracious Lord!”

It is this process of theosis which distinguishes Orthodoxy from the West, and the distinction that the Spirit proceeds from the Father and not the Son is both a symptom and a cause of this view.  Rather than being a minor theological hangup, it determines in a very basic and fundamental way how an Eastern Christian approaches their faith as distinct from a Western one (ie. Roman Catholics, or most Protestants).  Orthodoxy sees salvation as a journey of theosis through continually seeking the Spirit of God.  The West, on the other hand, believes Divine Grace to be created, and seeks mostly justification, with the gifts of the Spirit philosophically limited to evinced proof of that justification.

It remains to ask what is the truth of the matter.  Obviously I support the Orthodox view, but I won’t make a defense of it here, since there are numerous Internet articles doing so.  What those articles don’t do is tell you what the big deal is, and I hope I’ve given readers a partial understanding here.  All theology ultimately informs practices, and to be pietist and say that the theology does not matter as long as one lives to follow the moral practices of Christianity begs the question:  What sort of Christianity?  Defining the Trinity properly is therefore crucial.