I’m embarrassed to admit that among my Facebook Friends I have a handful of very eager Ron Paul fans who are so clearly blind to the reality of GOP politics that they actually think he has a chance of being the nominee.  Of course, stranger things have happened, but there is just no way it is going to happen.  I suspect that if he was one of two men standing before Super Tuesday, he might stand a chance, but that doesn’t seem a very likely scenario. 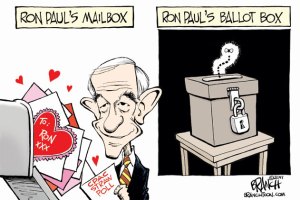 Despite the vast odds against him, Paul is running a very smart campaign.  It’s just been announced that he is not even going to contest Florida and will instead focus on upcoming caucuses.  This is not unlike Barack Obama’s strategy of four years ago, where, like Paul, he lacked the establishment machinery and connections that help in primary races, but concentrated on winning the caucuses where having people on the ground gave him an advantage.  It’s entirely possible that Paul could take some of these out, especially in states with loose registration laws.  Maine and Nevada seem like places where he could do very well – there’s enough liberals in the former to give him a boost, and despite the high number of Mormons in Nevada, there is no city that embodies libertarianism better than Las Vegas.

It won’t win him the nomination, but it will give him a few delegates, and bolster the libertarian presence at the GOP convention – always a good thing.